And finally we are in paint!! 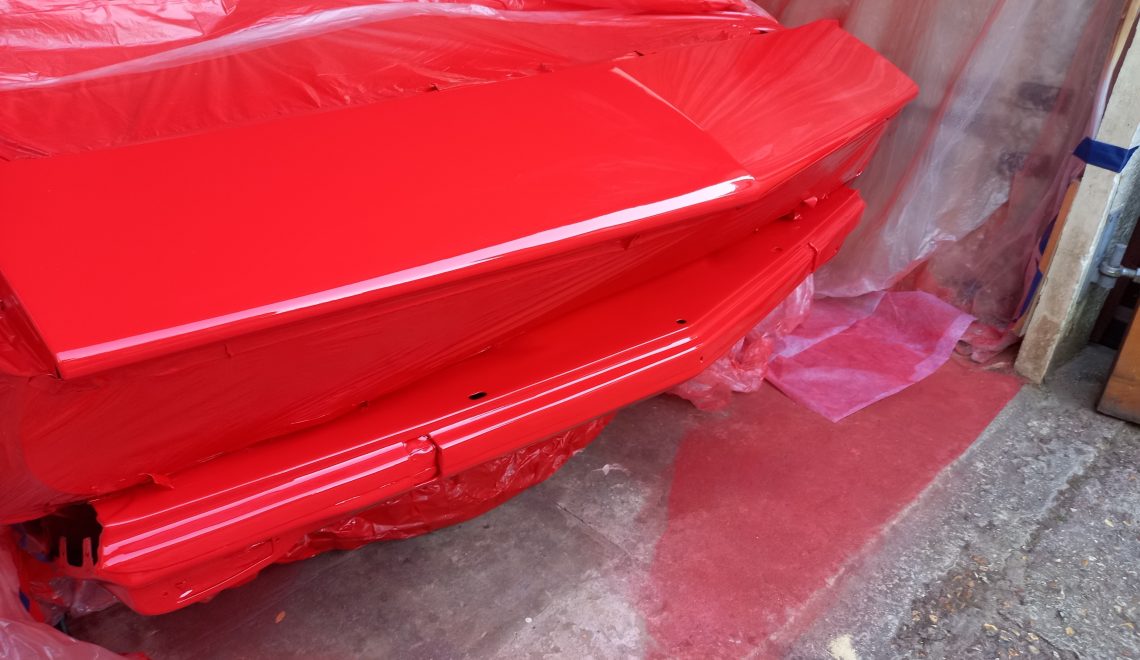 Well, its been a bust and slightly frustrating week this week, but we are finally in paint!

I decided not to buy a compressor but to hire one, well that was a mistake! I booked from Tuesday 21st off for the week and had the compressor turn up first thing Tuesday and the weather was stunning! So I cranked it up so I could test the new Devilbiss FLG-G5 out and after the initial filling up of the tank, I connected the gun and started to have a play around with it. Then when the compressor kicked back in to fill up it suddenly stopped? After a bit of checking I worked out, it had blown the fuse, strange, but I popped a new fuse in and up it started, BUT to only do the same thing again? new fuse, this time it just below it on startup.

After about 3 more attempts I called the hire company and they said it must be the 110v transformer and they would send a new one first thing tomorrow. I then carried on testing the Devilbiss with the small compressor, and man it paints nicely 🙂

The next morning they had not called about delivering the transformer, so I called them and they said it would be there after lunch 🙁 and again another nice day was going to waste. The new transformer turned up and I plugged it in all ready for some painting, same old thing, just blowing fuses?? So I called the hire firm and they said “maybe its the compressor” but we will need to order another in as we don’t keep them here, “when do you need it for!” well yesterday. “we will see what we can do”.

By this time it was 2 wasted days of nice weather so I decided to buy one. I called SGS and ordered the 50L verticle one. They said it would be with me Friday, which was better than the hire company as they still hadn’t called back about the replacement.

So I did a bit of prep on the bonnet to take out my frustration on not being able to paint anything.

Thursday morning I took the Honda out for a run as I could not do much more prep as everything was ready. When I got back from a run on the Honda the compressor had arrived a day early!! SGS are amazing. As the day was looking good it was time to get painting. I got the wings and the boot in the garage, mixed the paint as started to paint!

Now somewhere between my test on the Tuesday and me excitedly rushing to paint on the Thursday I must have got the pressure setting a bit different on the gun as I was getting quite a bit of orange peel? They came out ok, but I was not happy.

So after a bit of YouTubing on Thurday night and watching some of The Gunman videos on gun setup and having a bit more time on Friday I mixed some paint and fiddled about with the pressure and dropped it to 20psi and added and extra 5% thinners to bring it up to 15% and the finish was looking very good, time to paint.

The nose cone and front valance came out stunning, so then onto the body. Most of it came out pretty good, a nice finish but its hard to get the room in a small garage so I got 2 runs and noticed my prep on the roof could have been a little better! Maybe I should have run a cost over the roof first to see any imperfections. But now I know how great the gun is and I have the compressor i can visit the roof again later on.

I have flatted the boot and wings and will give them a final coat tomorrow.

I’m trying to get as flat a finish as I can so then hopefully its just a case of running over the whole car with cutting compound and then polish and not having to flat the whole car to get orange peel out. I’ve not done this sort of thing before so need to go and get some advice from the paint supplier before I do it the wrong was as if I can get away without having to had flat the whole car before polishing, that would be better!

More pics of the wings and boot to follow, then its the bonnet and doors after I have done a little corner repair on the doors. 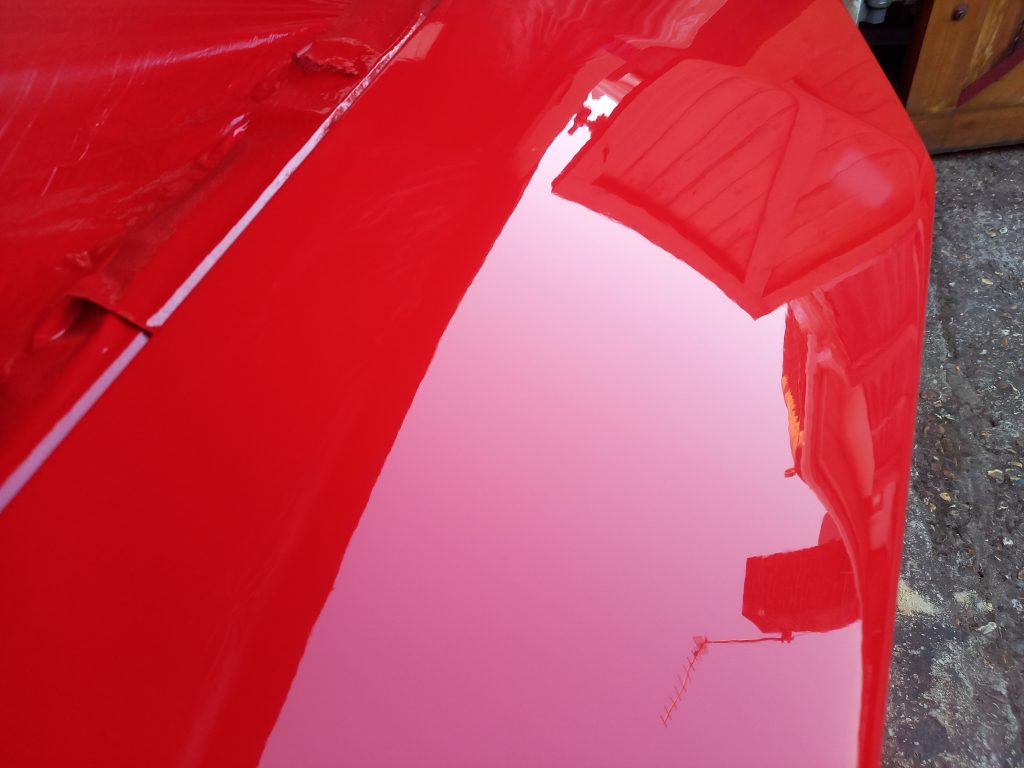 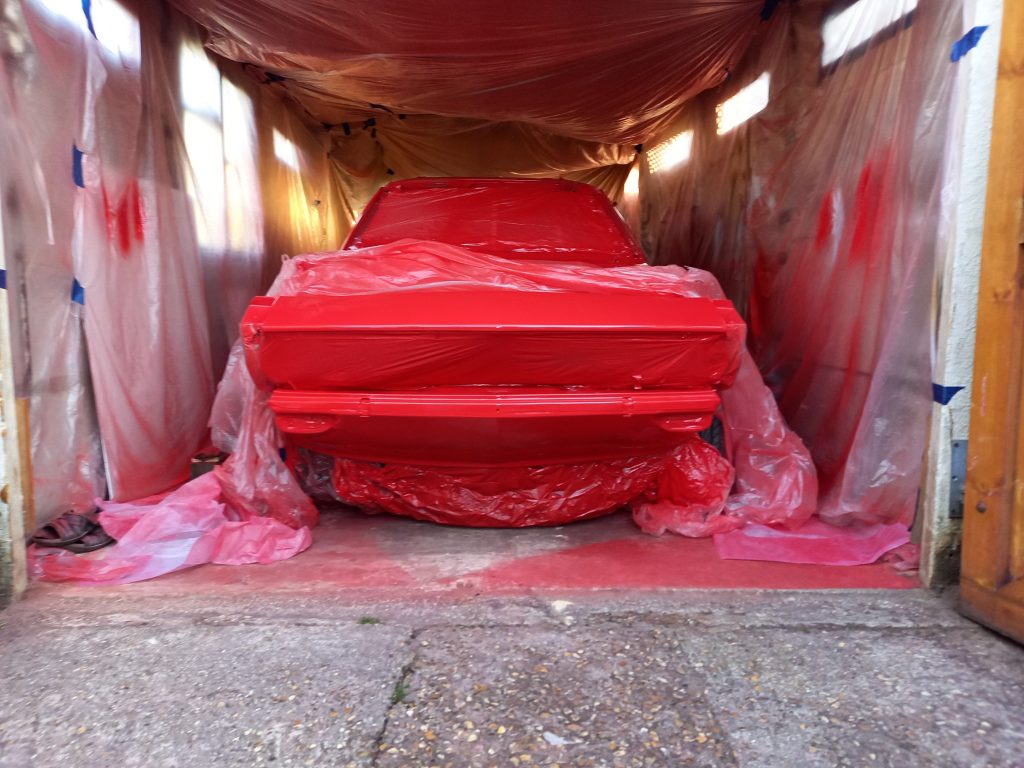