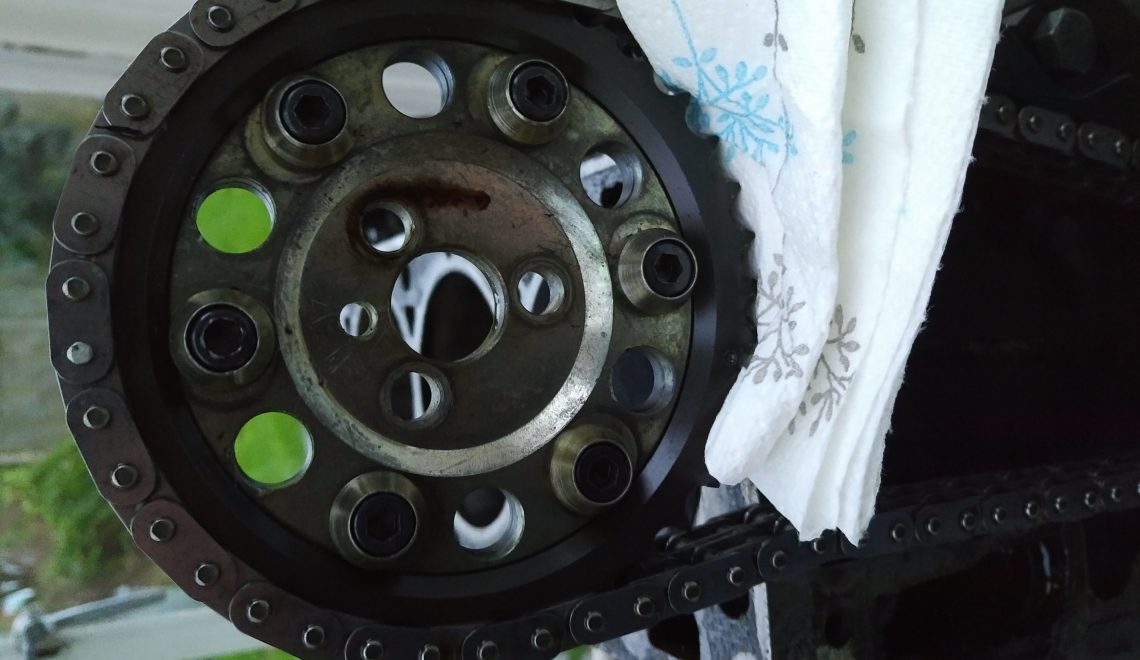 Timing the cam is one of Opels little endearing foibles! Even the Factory Service Manuals cam be misleading as the drawing of the engine is actually WRONG in some of them – nice huh! Fortunately the picture

of the crankshaft keyway position and the text is correct. The keyway in the crankshaftMUST face upwards and #4 cylinder be at Top

Dead Centre with the camshaft turned so that the valves for #4 cylinder are closed ( the cut outs in the cam for access to the head bolts will be in the correct position as this setting). Once the cam wheel is bolted on, with the dot lined up with the mark in the presssed sheet metal “shelf” that is bolted to the block beneath it, the motor must be rotated one complete revolution. This puts #1 cylinder at TDC with the valves shut and the motor is now in the postition to have the distributor installed and lined up for firing on #1 cylinder.

That is why Opels are usually timed 180 degrees

out from where they are suposed to be – some twit in the design stages obviously put the cut outs on the camshaft in the wrong place and we have struggled to cope ever since!

To amplify what GTJIM said a bit, the 4-cylinder

#1 and #4 cylinders are “paired”, as are the #2 and #3, so they are always at exactly the same position during their revolution, just “180 out” as far as ignition timing is concerned (one’s firing at TDC, the other fires at TDC on the next crank revolution). The complete “cycle” of any “four stroke” engine requires

TWO revolutions of the crank.

All engine “timing” is done in relation to

DOES NOT! Therein lies the confusion that sometimes baffles even

mechanics, at least initially. Some, who don’t take the trouble to look at the valves, never get this.

Easiest way to remember CIH “timing” from scratch is to:

Set both crank key and

dowel pin to 12 O’Clock position. This positions #1 and #4 pistons at TDC and also positions the cam to allow plug-side head bolt installation and torquing. The ignition “timing” is for the #4 cylinder however,

NOT the #1 cylinder as in almost all other engines. Your choice, either leave it and time the ignition for the #4 cylinder or rotate crank ONE full revolution and time it for the #1 cylinder. Makes NO difference!!